Eastern Studies (ES) is a scientific-theoretical journal published by the Institute of Oriental Studies named after Academician Z.M.Bunyadov of Azerbaijan National Academy of Sciences (ANAS).

The journal was included in the Register of Press Publications of the Ministry of Justice of the Republic of Azerbaijan in 2019 (Register No 4254).

Eastern Studies is published biannually and accepts articles written in Azerbaijani, Turkish, Russian, English, and Arabic. Manuscripts submitted to the Eastern Studies go through the evaluation of the experts and be published after their approval.

Oriental Studies is a complex science that is of large scope in which various areas such as philology, history, philosophy, and economics are learned.

In this regard, the Eastern Studies scientific-theoretical journal publishes articles related to Oriental literature (folklore, the Middle Ages, the New Age, contemporary age, and theory), Oriental languages and linguistics, history, archaeology and ethnography of the eastern countries, the economics of the eastern countries, Eastern philosophy and theology, and so on. 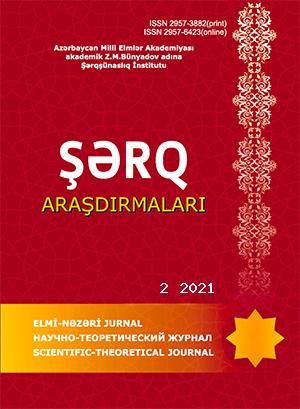